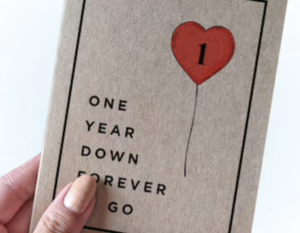 Some significant anniversaries have names which suggest appropriate or traditional gifts. These gifts may be exchanged by spouses or given by guests at parties; they may also influence an anniversary party’s theme or decoration.

These gifts vary in different countries, but some years have well-established connections now common to most nations: 5th Wood, 10th Tin, 15th Crystal, 20th China, 25th Silver, 30th Pearl, 35th Jade, 40th Ruby, 45th Sapphire, 50th Gold, 60th Diamond, and 70th Platinum. In English-speaking countries the first, wooden, gift was cut on the day of celebration and then presented to the wife as a finished article before the next two quarter days had passed.

Gift idea links from Amazon provided below – We are an Amazon affiliate. This means that, at zero cost to you, we will earn an affiliate commission if you click through the link and finalize a purchase.

Booking Say I Do Again